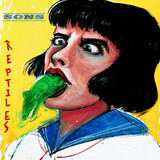 SONS release their debut single, ‘Reptiles’ on 10th February 2017 on End Of The Trail Records with Rough Trade Distribution.

SONS are a hard hitting fuzz rock duo hailing from Brighton consisting of Brothers Lee and Nick Meldrum. Musically they have been together for less than a year. SONS wear baby blue and you know what, they know where you live. SONS make music for fans of Slaves, Nirvana, The White Stripes, The Hives, ESTRONS, Coquin Migale and The Cramps.

SONS create a raw post punk noise that hits you with such sheer velocity and volume that you are sure to still be vibrating long after their set has concluded. Combining relentlessly driving drone with catchy punk hooks, they take the well worn and at times formulaic "heavy" two piece format, knock it on squarely on its arse and tell it to sort it's ***king life out, or else!

SONS motto is simple, why tease them with a wall of sound when you can stun ‘em then cover them over with concrete? Best experienced live to enjoy the full raw power and feel your skull vibrating to their unhinged yet beautiful glory. This year SONS they have appeared The Crows Nest, Crystal Palace, The New Cross Inn and The Hawley Arms at Camden Rocks.

Airplay support for SONS includes, Radio X and BBC Introducing South, Sussex and Surrey. SONS are set to tour the UK during January and February 2017 in support of the ‘Reptiles’ single release.

They fix up, They look sharp
Put on the serpent smiles
Camera rolls and now the start
In a row, The phoney line
The false hope
Can't be blamed to think maybe this time
You pick a side
(Pick a side?)
It seems fair
(Is it fair?)
Never question
For your good is the reason they're there
They sell a thought
(Tell a thought!)
And push a lie
(Push THE lie!)
But don't dispute
Opinions are not needed at this time
Yeah
Word of the reptiles, silver tongues telling you to tow the line
Yeah
The world of reptiles, silver tongues telling you to tow the line
What they say, it doesn't matter.