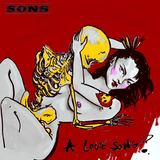 SONS
‘A Love Song?’
Self-released May 19 via all digital platforms

SONS are set to drop their sophomore single, ‘A Love Song?’, on May 19 via all digital platforms.

Building on from their blistering debut, ‘Reptiles’, ‘A Love Song?’ sees the band inspired from some of their 90s favourites, showcasing a grungier side than on the first single, while still maintaining that acerbic punk edge to their music.

SONS are a hard hitting punk/indie rock duo hailing from Brighton, consisting of brothers Lee and Nick Meldrum, who’ve only been making music together for less than a year. SONS create a raw post punk racket that combines relentlessly driving drones with effortlessly catchy hooks.