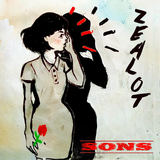 SONS
‘Zealot’
Self released August 25 via all digital platforms

SONS are set to drop their blistering third single, ‘Zealot’ on August 25, self-releasing via all digital platforms.

Following on from the successes of their first two singles, ‘Reptiles’ and ‘A Love Song?’, the Brighton duo return in fine form with their new track. Verses driven by a dark, brooding riff combined with an almost methodical drum beat and a chorus filled with a ferocious, caustic punk rock edge, ‘Zealot’ showcases SONS ability to write sharp and catchy hooks while never compromising on their message.

In times of political uncertainty, the new single is the band’s stand up, fight back anthem. Speaking on the track, the band said, "The song is about rising up, using your voice to let the powers that be know you won't just take it. Push them, shout at them, whatever you know is right don't give up until you're heard. It isn't easy but until we push for the change then nothing will change".

Recently, the band had wildly popular shows at Camden Rocks festival and The Great Escape, as well as a number of gigs across the UK. With more gigs lined up over the coming months, SONS is a name to keep an eye on for the remainder of 2017 and beyond.