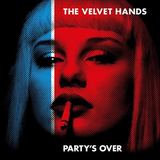 The Velvet Hands release their fourth single, ‘I Don’t Mind’ on 30th March 2018, via Easy Action Records/Zen Ten and across all digital formats.

The Velvet Hands are the latest band to emerge from Cornwall’s blistering garage-rock (‘Kernow Wave’ - NME) scene. The ambitious, Stones x Strokes tinged quartet formed in 2015 at Truro College (and are still in their teens) and already have released a string of standout DIY singles. The Velvet Hands blistering live sets, with two frontmen Dan Able and Toby Mitchell wrestling for the mic, have seen them booked for a run of big name gigs including headline shows for BBC Introducing at Boardmaster Festival and stand out gigs at The 100 Club and The Water Rats. ‘I Don’t Mind’ follows their previous releases ‘Only Blame Myself’ and the strident, ‘Games’ and past #RSD20217 release, ‘Sick Of Living’. ‘I Don’t Mind’ is the fourth single taken from their debut album, Party’s Over slated for vinyl release on 21st April - #RSD2018 Record Store Day, with full digital release on 4th May 2018.

‘I Don’t Mind’ was recorded at Troubadour Studios, Falmouth and produced by Ben Woods (ex -Lost Dawn/The Golden Dregs). New single ‘I Don’t Mind’ is filled to the brim with charisma and swagger that the band effortlessly exude. Garage-y, punky and punchy, and with guitar breaks reminiscent of Lou Reed and Stirling Morrison at their most visceral, the new single is another boisterous offering. The Velvet Hands have flagged up by the likes of Fred Perry Subculture and This Feeling as being #Bigin2018 and feature on many industry watchlists for the new year. The Velvet Hands are Toby Mitchell, Dan Able, Louis Willbourne and Sam Hilder.