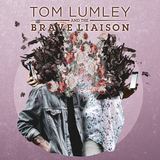 Tom Lumley And The Brave Liaison - ‘Shrink’
10.4.20 Fort Records via CD Baby - from the new EP Sign Of The Times

“There is no other way to start the show then the latest release from Tom Lumley” Ellen Ellard, BBC Intro Cambridge
"What an excellent name, how did you fancy that then? They have got quite a following, gone down well!" Gordon Smart, Radio X
‘Big Fan of that track!’ John Kennedy, Radio X
“An exciting Cambridge artist to look out for”, Fred Bambridge, It’s All Indie
“Another cracker from Tom Lumley” Jim Gellatly, Amazing Radio
“Tom Lumley a force to be reckoned with”, The Independent
“Honest, endearing songwriting”, Clash

Tom Lumley And The Brave Liaison release their new single ‘Shrink’ on 10.4.20 via The Fort Records. ‘Shrink’ is the Cambridge based quartet’s second single from their upcoming EP ‘Sign Of The Times’ released 24.4.20 via Fort Records.

Tom Lumley And The Brave Liaison are gaining a reputation for taking to the stage with monumental energy that’s felt all the way from the front of the crowd to the back of the venue. Lumley’s debut ‘Dream City’ EP, released in 2017 charted at No.2 in the iTunes Rock Charts. Previous single ‘Causal’ was chosen by Huw Stephens as one of his #Ones To Watch 2020 for BBCR1 and followed the bands debut Maida Vale Session last December. Tom has clocked up repeat plays and Playlisting from Radio X and the influential Student Radio Association (SRA).

Having only been a band for just over two years, they’ve already supported some of the UK’s hottest acts, including The Hunna and Sam Fender. In 2017 the band played the very last Secret Garden Party for BBC Introducing, at the time having only been a band for a matter of months. As well as this, they’ve played stages at the Isle Of Wight festival, Tramlines, Bestival, Camden Rocks, Truck Festival, Wilkestock, Dot To Dot Festival , Splendour Festival and Green Meadows Festival.

Speaking on the meaning behind the new single Lumley commented; “Shrink is about the mind games lover play with each other when things aren't going that well for the relationship, we’ve all been there and it hurts, you question everything about yourself, and what you’re doing wrong, when maybe it's not yourself that’s the problem.”

New single ‘Shrink’ pushes alternative edge to the forefront as with their most recent tunes, giving hints of noughties guitar bands such as The Automatic and Millburn. The forthcoming single as well as all the tracks from their Sign Of The Times EP was recorded, produced and mixed by Jake Day at North Acre Studios and mastered by Robin Schmidt.