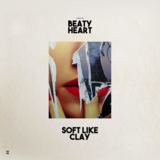 South London trio Beaty Heart have announced the follow-up to recent single Flora with new track Soft Like Clay, which impacts on 13th May. They have also announced the release of new album Till The Tomb on 29th July, which is available to pre-order now and is released through Caroline International/NUA Entertainment.

Flora was the first introduction to the band’s forthcoming new album, Till The Tomb, and received strong support from Radio 1; with plays coming from Annie Mac (also featured as one of her New Names of 2016), Huw Stephens (Single of the Week) and Phil Taggart; Lauren Laverne and Steve Lamacq at 6Music; John Kennedy at Radio X (Evening Playlist addition) and internationally it was added to Triple J’s playlist.

Soft Like Clay is signature Beaty Heart in its novel alt-pop sound, which builds with rousing percussion and beats, backed by distinctive vocals that launch into a compelling and memorable chorus. The band says;

“We wrote Soft Like Clay in an asbestos haze on a building site in Peckham. We were too broke to afford a rehearsal space, so we ended up in a friend's basement, surrounded by earthy colours, dust, trash and bricks, which inspired a fractious sounding song about transformation.”

“The lyrics were a reaction to the constant anxiety and tension which many artists experience as they attempt to forge a path that conflicts with the expectations and demands of society, or reality. If you read the lyrics based on that information, you might perceive a slightly defeatist atmosphere, suggesting a readiness to submit to these demands. But an alternate interpretation portrays a person willing to change and adapt positively to the influence and love of another.”

“During the writing and recording process, this song was constantly being changed and re-moulded, and initially we struggled to find a structure and tonal direction that we were happy with. The anxiety portrayed in the lyrics is a pretty accurate reflection of the song's creation.”

Beaty Heart are Peckham-based alt-pop trio Charlie Rotberg, Joshua Mitchell and James Moruzzi, who released their acclaimed debut album Mixed Blessings in 2014, championed by the likes of Huw Stephens, Phil Taggart, Steve Lamacq and John Kennedy. Now they return with a reinvigorated new sound, influenced by the likes of Lee Scratch Perry, Arthur Russell, Roots Manuva, Pharoah Sanders and Floating Points. Beaty Heart juxtapose their musical and cultural influences from a captivatingly eclectic variety of sources, weaving an array of samples, instrumentation, and percussion into their sound to create something that is unique and distinctive.

Over the last year, Beaty Heart have been in the studio working on their second album Till The Tomb with producers David Wrench (FKA Twigs, Caribou, Jungle) and Dave Eringa (Manic Street Preachers, Wilko Johnson), which is set for release on 29th July. Both their live and recorded music is accompanied by original video and artwork, with the latter seen on the sleeve art for Soft Like Clay, which follows suit with the Flora artwork, both created by Yves Rulliere.

The full tracklisting for Till The Tomb is as follows:

After an extensive worldwide tour with Jungle last year, Beaty Heart have been performing shows in the UK and Europe and have announced a host of headline shows including a show at London’s Electrowerkz on Wednesday 13th April. They will also be performing at festivals this summer including Great Escape, Live At Leeds and Bestival.