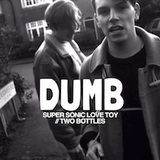 ‘You’d think Birmingham’s talent pool would be all used up by now but Dumb might tell you otherwise. The newest of the bunch, these four under-twenties have no time for the beachy escapism of their contemporaries, veering instead towards something brasher” – NME

‘If it’s a darker twist on the blissed-out vibes of the Birmingham scene you’re after, Dumb are where the smart money is at. A petulant cross between the US college rock of Pixies, Built To Spill et al and the tracksuited swagger of early Britpop’ – The Fly

The latest act to explode out of Birmingham is Dumb with their raw, unsettling sound. Their debut single ‘Dive’ set out their stall in April, distinguishing the band from the rest of what their hometown was offering. Influenced by Pixies and cult American indie rock heroes Built To Spill, its bold and brash combination of self-assured swagger, slick melodies and Dylan’s rasping vocals caught the attention of the likes of NME.

Next single ‘Retina’, which was released in August, continued that mission statement, an explosive riot of squalling guitars and cocksure attitude. It generated great online support from key tastemaker blogs sites.

For their first ever gig the band went straight to the prestigious stage of London’s KOKO and the legendary Club NME night before returning home to headline Birmingham’s O2 Academy 3. Last Autumn they joined The Agency Group roster and continued to build their live reputation by playing key slots with the likes of Darlia, Skaters, LSA, Superfood, Baby Strange, Splashh, Charlie Boyer and the Voyeurs plus a memorable night opening their manager, Jon Brookes’ memorial night at Royal Albert Hall with The Charlatans, The Vaccines & New Order in October.

During the recent winter months the band has recorded brand new tracks which have been produced in London by Cam Blackwood who has recently worked with Darlia, London Grammar & George Ezra. The two songs from this recording session, ‘Super Sonic Love Toy’ and ‘Two Bottles’, will be released as a double A side single on 24th February. The single will be supported by a UK tour including headline shows in London & Manchester and a sell out show at the bands local venue, The Hare and Hounds in Birmingham. More details below.

2014 will see Dumb continue to cement the foundations they’ve built, establishing themselves as one of the country’s most promising new bands.