TUNE FERGUS - Too Much 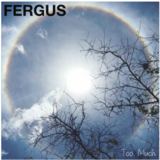 FERGUS
releases new single ‘Too Much’
via Goldun Egg Records


London based, singer songwriter FERGUS, releases new single ‘Too Much’, the second single from his ‘Three Of Swords’ EP due for release August 2019. Produced by Jake Gosling and released via Goldun Egg Records.

‘Too Much’ builds seamlessly from haunting melodies to an explosion of heightened intensity. There’s a stark duality throughout the track between verses, from the lush melody of the electric guitar and Rhodes piano, to the fury and exasperation of the final chorus. The live drums, beautifully meld together the pace of the track to make it complete.


Speaking about ‘Too Much’ FERGUS said, “This song is about feeling trapped by conflicting emotions, obsessing over everything, then eventually exploding in an outburst you grow to regret, it may be cathartic, but costs your dignity. There’s a sad desperation, but also an element of cruelty in the line ‘I don’t want these memories.”

The release of ‘Too Much’, continues the story of a new direction for FERGUS, we can expect to see more attitude and a bolder sound from his second EP ‘Three Of Swords’. Previous releases have garnered support from 6 Music’s Tom Robinson, Clash, Songwriting Magazine, Atwood, When The Horn Blows, Radio X Communion, BBC Introducing, Soho Radio and Hoxton Radio to name but a few.

“The newcomer's work gets under your skin, gradually pushing its way past your defenses, overpowering your emotions. From that soft, stark delivery down to the trickle of electronics, “FERGUS has developed a potent, highly individual style all his own.” Clash

“If this track is anything to go by, FERGUS’ second EP will continue to have him stand out as one of the purest and most evocative acts in the singer songwriter/ indie pop genres right now - When The Horn Blows