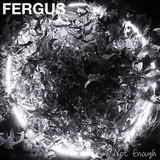 "A mesmerising look at a rising star, the music video a must-watch, so press play below now and follow Fergus" – Hunger

"Sparse yet lush, Fergus‘s cathartic compositions ooze emotion … an orchestral-tinged AM ballad that leaves a lasting lump in the throat in the vein of Night Beds’ exquisite debut LP ‘Country Sleep’" - Hidden Herd

“If this track is anything to go by, FERGUS’ second EP will continue to have him stand out as one of the purest and most evocative acts in the singer songwriter/ indie pop genres right now - When The Horn Blows

London based, singer songwriter FERGUS, releases new single ‘Not Enough’ via Goldun Egg Records. This is the final single from his ‘Three Of Swords’ EP, due for release on August 7th 2019.

Speaking about ‘Not Enough’ FERGUS said, “This track is about embracing righteous rage and darkness and acknowledging the mismatch morally in a relationship. The lyrics are dripping with resentment and bitter disappointment. There are a few people in my life who will be happy to hear the end of this particular story in my life.”


After a successful month-long residency at The Cocoa Vaults in London, playing Sofar Sounds, the Cornbury Music Festival and Fresh On The Net Live in July, FERGUS has a run of live shows coming up this summer throughout the UK.