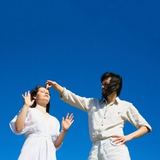 “ Their vision is a utopian one, influenced by rave culture, Eastern religions, politics and magic.” - The Quietus

“...no-one can outdo the euphoric Euro-disco vibes of Free Love…” The Skinny

Free Love, the latest manifestation of Scottish disco duo made up of Suzanne Roden and Lewis Cook (formerly known as Happy Meals) have released their new single ‘Pushing Too Hard’, following their first outing earlier this year with glimmering new-wave influenced single ‘Synchronicity’. Previously releasing on labels such as Optimo and Night School Records under the name Happy Meals, as an ironic nod to consumerism, the duo recently changed their name to Free Love after entering a new creative phase, reclaiming the overused meaning of the term with their sincere sound.

A joyous avant-pop piece, ‘Pushing Too Hard’ features floaty French vocals from Suzanne and krautrock, Italo inspired production. The single also features a bonus track in the darkly atmospheric, acid-tinged ‘July’. Having performed at Brighton’s Great Escape Festival, Gottwood and Lovebox this summer, the duo are set to bring their experimental dance pop sound to Bestival and support Django Django at Edinburgh International Festival later this summer. The political lingers just beneath the surface of this dance party, with the duo’s utopian vision and dynamic sound taking inspiration from rave culture, Eastern spiritualism and communitarian politics. With ‘Pushing Too Hard’ and ‘July’ Free Love set out to channel the energising sound of their charismatic and freewheeling DJ sets, inspired by the Italo and proto-house music they love to play.

Free Love emerged in 2014 from Glasgow’s renowned musical hub The Green Door Studio (the birthplace of other critically acclaimed DIY acts like LAPS, Golden Teacher, Total Leatherette and more). Their debut album Apéro was shortlisted for Scottish Album Of The Year in 2015, and was followed up by their second album last year, Full Ashram Devotional Ceremony. They duo have also toured across Europe with acts including Liars and Flaming Lips & Sylvan Esso, plus have played festival shows around the world from Moscow to Austin and Bangalore.

With the release of their second single and more new music and live shows on the horizon, Free Love are set to continue their unique and steadfast musical evolution in 2018 and beyond.