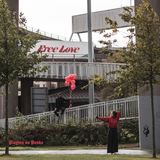 “Their vision is a utopian one, influenced by rave culture, Eastern religions, politics and magic.” - The Quietus


“...no-one can outdo the euphoric Euro-disco vibes of Free Love…” - The Skinny

Since their seductive Euro disco-flecked single ‘Pushing Too Hard’ came out in late July, the duo have rounded off a busy summer of festival bookings with a live performance at Gottwood, Lovebox, supporting Django Django & Sylvan Esso at Edinburgh International Festival and a live 6 Music session for Vic Galloway (sitting in for Marc Riley) after Tom Ravenscroft made them his 6 Music Recommends. Their credentials as one of the best new live acts continues to go from strength to strength - they will be supporting James Holden and The Animal Spirits on a string of UK tour dates this week, starting at London’s Southbank Centre on 4th October, followed by their own run of headline dates, then finishing off their fruitful year with a New Years Eve performance at the famous Edinburgh’s Hogmanay with Metronomy & Franz Ferdinand.


The duo’s new 8 track EP ‘Luxury Hits’, which features previous underground dance-pop favourites ‘Synchronicity’ and ‘Pushing Too Hard’, is an open-hearted love letter to possible futures. With the political continuing to linger beneath their dance party, the duo describe the EP as a “trans-temporal projection through pop music for dancefloors. The music is about breaking through the limitations of our surroundings, not through escapism but defining a new reality on our own terms and breathing it into existence.” Featuring 6 brand new tracks, the record is a tropical soup of sonic utopias - channeling balearic nightcrawlers, wistful acid drenched production, French vocals and glittering italo and synth-heavy rhythms - served in the mercurial bowl of HERE AND NOW.