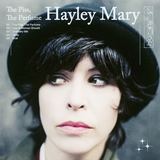 HAYLEY MARY
shares new track ‘LIKE A WOMAN SHOULD’


Debut EP ’The Piss, The Perfume’
out now via I OH YOU

Announced in new The Great Escape line up additions here

“[The Piss, The Perfume] most exciting pop song to arrive from Australia in 2019” - Idolator

“Forthright in energy and execution” - Clash


2019 has seen Hayley Mary make a compelling introduction, which culminated with her debut single ‘The Piss, The Perfume’ topping at #5 on Idolator’s Best Pop Songs of 2019. Now the Australian icon shares her latest track ‘Like A Woman Should’ off her highly anticipated debut EP 'The Piss, The Perfume' - out now.


‘Like A Woman Should’ serves as a contradiction of attitudes, disguising a heartfelt love song written for a real and life-affirming man, as a social commentary about the conceptual collective fear of men women are forced to be aware of. As Hayley’s voice ballads on, the track serves as an anthem for all women who want to “walk the street like a woman should” with confidence. Suitably, the video oozes with confidence and declaration of independence as Hayley explores a night out in town.


Speaking of the track, Hayley says:


“I wrote this one evening while living in Edinburgh while sipping a red wine in the middle of winter. I’d been on my own for a while as my partner was away and the chorus just came to me. I think of it a little bit as a reflection on the zone where insecurity clashes with romance; or harsh realities meet idealism. Perhaps it’s an expression of my hope that the latter will win in the end.”


Edinburgh turned out to be a large source of inspiration for Hayley’s debut EP. Most of the EP was written while Hayley was working in Smith’s Deli, “the best caff according to one local taxi driver, in Edinburgh”. She and her partner Johnny Took (DMAs) relocated to the Scottish capital last year to live “the simple life” and explore the countryside of Hayley’s birthplace. “I got very in touch with my heritage living there and feel like I grew into myself a lot.”

Produced by Scott Horscroft (Silverchair, The Presets, Tkay Maidza, Middle Kids), ‘The Piss, The Perfume’ fuses Americana, Australian and punk songwriting with Motown inspired rhythms and soaring vocal style, resulting in a heartfelt collection of songs that pack a punch. ‘Like a Woman Should’ follows the success of previous singles, ‘Ordinary Me’ and ‘The Piss, The Perfume’ which received immediate praise internationally from the likes of The 405, Paste, DIY, The Line Of Best Fit, Idolator, Flood, Clash, and more.

Global tour dates are to be announced shortly in 2020. Performing at this year’s The Great Escape, line up additions announcement here.