TUNE Laurent Bourque - Thinking of You 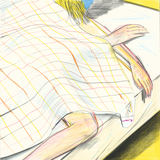 Shares new visual for 'Thinking of You’ here


"Smooth with concealed edges, it's ("matador") a striking reminder that love is painted by many colours, and seeing them all is better than not seeing them at all." - Earmilk

Canadian indie-pop singer-songwriter Laurent Bourque pre-empts his debut London show at Old Queens Head on 25th September with a brand new visual for ‘Thinking of You'. This is the second single from his highly anticipated album 'Blue Hour’, which is due early 2020.

‘Thinking of You’, produced by Dan Ledwell, has received playlisting love from Spotify's New Music Friday, Indie All Stars, Fresh Finds: 'Index', featured on GlamGlare and was spun on SiriusXM's Sunday Service. Written by Laurent, the new single features Jenn Grant on the lovely poppy choruses.

"’Thinking of You’ is a song for anyone who has ever spent too much time daydreaming about someone that was important in their life in some way," shares Laurent. "It’s about those little vignettes and moments in time we reminisce about when we’re busy doing something else. It’s about the instinct to maybe reach to that person we’re thinking about and want to ask them how they are or what they are up to, yet we always hold back due to being scared of seeming vulnerable."


Director Julie Hendrickson adds, “I’m really interested in what happens when a relationship shifts... when something drastic happens with a friend, with a lover, when death occurs... really any kind of dynamic switch. When there’s a disruption, the person you once knew disappears in a certain sense and lives on in your memory. This video explores what that could feel like... it flows between physical presence and memory.”


The song follows his first single from 'Blue Hour', ‘Matador', which premiered on tastemaker outlet Earmilk and reached the Top 20 chart on CBC Radio in Canada.