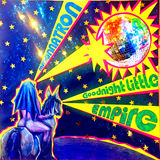 released on Trashmouth Records on Friday May 24th 2019

“Goodnight Little Empire observes the apocalyptic events described in the Book of Revelations from the comfort of a plush, velveteen couch at the back of a 1970’s disco lounge. Are we glibly rolling out the moves in the advent of the ever insidious collapse of humanity? & are we looking cool while we’re doing it?"


Madonnatron have announced details of the release of their second album, 'Musica Alla Puttanesca', which is released on Trashmouth Records on Friday 24th May 2019.

Like their debut, which was released to much acclaim in July 2017, 'Musica Alla Puttanesca' was produced by Liam D. May at Trashmouth Studios. The track listing of the 11-track album is as follows:

“Having moved forwards emotionally from the wilds of dystopian stalking and associated hobbies, Madonnatron have instead been found frolicking through the green pastures of gangsta pimps, Hindu God wars, Cyber Men invasion, loveless nightclub hook-ups, modern Italian Nabokov, and revered screen goddess Elizabeth Taylor. Think of them as post-punk lab rats in the Secrets Of Nimh, feasting dubiously on back-dated episodes of Top Of The Pops. With notorious roaring guitars, chanting vocals and rabid drums they audibly glow in the dark, are strong-armed, and will probably bite you.”


In the last couple of years, Madonnatron delivered a successful UK headline tour; supported The Moonlandingz, PINS and The Black Lips; featured on the line up at Green Man, Manchester Psych Fest & Ritual Union & Great Escape; played two live sessions for Marc Riley on BBC 6 Music and one for John Kennedy on Radio X as his Artist In Residence; and toured with Trashmouth Records and label mates Meatraffle.


They return in the early summer with a run of headline shows across the U.K. The full list of shows is as follows:

Plus Festival dates to be announced soon


Their eponymously-titled first record released in July 2017 elicited excellent reviews, featuring in Mojo, Q and The Quietus - appearing at no.22 on tQ’s top 100 albums of the year and in their top 50 singles of 2017; Amazon’s Best New Bands of the Year, as well as gaining top album status in many independent music blogs across the world.