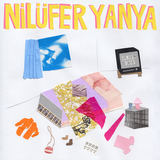 “the shuffling, narrative-rich Small Crimes confirms the impression that this … singer and guitarist is one to keep a super-beady eye on” - Sunday Times Culture “Breaking Act”

“a young, understated voice of west London” - Loud and Quiet

Watch a clip of her performing 'Baby Love' here.

A freeze frame moment, 'Golden Cage' captures that sense of being caught up in something, but having no desire to walk out. "On reflection you see it for what it really is - a trap - but when you're in it, everything seems so perfect and you're not paying attention to much else," Nilüfer rounds off.

Nilüfer has already premiered the gabber and '90s rave inspired video for Plant Feed's gorgeous lead single 'The Florist'. Directed by her sister and sister's boyfriend - Molly Daniel and Patrick Chamberlain - the subversive visuals embody the darker theme of 'The Florist', "essentially chasing a high to fill the dark empty lonely void within," as Nilüfer explained to Noisey.

Vevo recently invited Nilüfer in to perform a stripped down version of 'The Florist' for theirdscvr series. Watch the stunning session video here.

21 year old Nilüfer Yanya made a huge impression last year with her captivating first 12" release on the Blue Flowers label, Small Crimes. The EP's brooding title track ‘Small Crimes’ documented the petty theft of her bicycle from her garden whilst the more playful ‘Keep On Calling’ bristled with a lightness of touch, Nilüfer hitting out at a time-wasting boy over lush, flowing instrumentation. Topping the Hype Machine charts with both singles from the record and earning praise from The FADER, Loud And Quiet, Pigeons and Planes, The Line of Best Fit, DIY, Interview Magazine and many more tastemaker titles; Nilüfer also landed coveted spots as one of i-D Magazine’s Class of 2017, The Sunday Times’ Breaking Act and Wonderland’s New Noise. Remixes from buzzing new Danish producer Vasco and iconic UK electronic pioneer Bullion accompanied the two singles, further establishing Nilüfer Yanya as a singular, exceptional, and in-demand new talent.

Inspired by iconic songwriters Nina Simone and Jeff Buckley and modern influencers such as Jerkcurb and The Invisible, Nilüfer's music encapsulates young urban London, with uplifting soulful melodies and sharp lyricism cut against a backdrop of minimalist guitar riffs and atmospheric beats. That sense of timelessness and the present caught the ear ofRadio 1’s Huw Stephens and Annie Mac, 6 Music’s Steve Lamacq and Lauren Laverne, and Beats 1’s Matt Wilkinson, with each DJ giving Nilüfer regular rotation throughout the release campaign, which was capped off at a sold-out Slaughtered Lamb in London - her first ever headline show.

Nilüfer and her sister Molly Daniel (who with Patrick Chamberlain co-directs Nilüfer’s excellent shoestring-budget videos) travelled to Athens last summer to set up their charitable organisation, Artists In Transit, in aid of refugees entering Europe. Artists In Transit aims to assist displaced people through arts and music lessons and their recently launched zine, My Friend, helps fund their work. Nilüfer also recently performed at theRadical Love exhibition on Valentine’s Day, raising money for The Global Fund for Women Refugees through an exhibition of Arabic love and lust poems.

Nilüfer’s videos for 'The Florist', 'Small Crimes' and 'Keep On Calling', produced alongside Daniel and Chamberlain, are a strictly homegrown affair. Filmed in locations across North East and West London, influences range from gabber and '90s rave culture to ‘70s style getaway car films to trap videos, with strong matriarchal leads featuring at the root of each deliciously subversive story. The cast members are exclusively either Nilüfer’s family, part of the film crew, or strangers she approached around the sets.