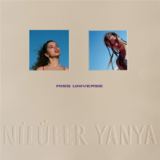 “You’ll listen as if your life depended on it” - Q ****
“A distinctive new voice in indie rock, a deeply expressive singer and sharply inventive guitarist” - Uncut ****

“On a musical and human level, then, the world needs more people like Nilüfer Yanya” - Mojo ****
“A true original” - The Guardian (Album of the Week) ****
“The rapturous debut from the British singer-songwriter takes adventurous pop-rock crucibles to new heights with her illusory songwriting and stunning voice.” - Pitchfork 8.3 (Best New Music)
Watch the video for ‘Baby Blu’ HERE
Breakout star Nilüfer Yanya has today shared ‘Baby Blu’, the latest single taken from her critically acclaimed debut record 'Miss Universe' along with its brilliant accompanying video. Shot all over Tokyo over New Year 2018, the video for ‘Baby Blu’ is something of a family affair, starring Yanya, her sisters Molly and Elif, and brother Cemil. Yanya has also just announced her biggest headline show to date at o2 Shepherd’s Bush Empire on 17 November. Tickets are on-sale from Friday 12 April. Yanya is currently on a Turkish, U.K. and European headline tour which included a sold-out show this week at London’s Hackney EartH. Fellow London songwriter and guitarist Westerman supports on all of the current U.K. dates and tickets for the rest of the tour are available from HERE.
Already proclaimed Annie Mac’s ‘Hottest Record In The World’, the instantly infectious ‘Baby Blu’ is a stand out track amongst an album packed with stellar singles and powerful songwriting. Explaining the video shoot, Yanya said: “We shot the video in Tokyo over New Years - me and my sisters went to visit my brother who is studying there for a year. My sister Molly had the idea for theming the video around street racing cars, which proved to be quite difficult to track down as it’s highly illegal in Japan. We managed to find a few car shows and garages, got some fast rides and had lots of fun. For me this video is really about us as siblings, refusing to let go of each other and our childhood.”
The ambitious and compelling debut album from Yanya arrived in March on ATO Records. 'Miss Universe' has since seen widespread acclaim from a vast number of publications, including NPR who handed it a First Listen and Pitchfork who awarded it their coveted Best New Music accolade. 'Miss Universe' received rave reviews from The Guardian - their Album of the Week - The Independent, MOJO, Q, Uncut, Wall Street Journal, Stereogum (Album of the Week), The Line of Best Fit (Album of the Week), CLASH, DIY, Loud & Quiet, The Skinny, All Music, Exclaim!, Dork, MTV News, Vinyl Me Please, and more.
Largely recorded in the same remote Penzance studio she used to jam in with her uncle Joe - a former musician himself - 'Miss Universe' features co-productions with both her former school guitar teacher The Invisible’s Dave Okumu and her live bandmates Jazzi Bobbi and Luke Bower, as well as producers John Congleton, Oli Barton-Wood, Will Archer and M.T. Hadley. Inventive, expressive and rapturous, the album has seen Yanya deservedly hailed as a true original and a vitally important new voice in indie-rock.
Later this year, Yanya will head back to the U.S. for her first U.S. headlining tour, including a stop at NYC's Music Hall Of Williamsburg - upgraded having instantly sold-out Rough Trade NYC the day tickets first went on sale - on 23 July.