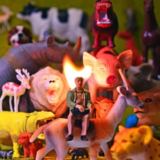 "Plastic Mermaids run wild with a dozen ideas at once and strike gold every time.” THE SUNDAY TIMES

“These guys have nailed a mix of space-rock, psychedelia, folk and chamber pop that has been winning over fans around the UK.” THE INDEPENDENT

"Plastic Mermaids, from the Isle of Wight, have steadily built a rare and glittering world that stretches far beyond their island vistas, one that’s gravitational pull is irresistible." LONDON IN STEREO

“If you close your eyes, 'Floating in a Vacuum' makes you feel like you're gazing far beyond the planetarium dome and into space itself. It’s a kind of heavenly body with a twinkling sense of wonderment and uncanny vocals that sound at once familiar, yet distinctly alien.” THE LINE OF BEST FIT

“Channelling The Flaming Lips, the woozy, otherwordly rocker 'Floating in a Vacuum' is full of cinematic, orchestral tones and shiny superb production.” CONSEQUENCE OF SOUND

“Psychedelic in that neat, amateurish, deeply English sense, the group take hold of every aspect of their sound, right down to the effects they use.” CLASH


Recent singles revealed from their new album include ‘1996’, ‘Floating in a Vacuum’ and their previous single ‘I Still Like Kelis’ all of which have been warmly received by fans and critics alike, supported at radio by Radio 1’s Jack Saunders, Huw Stephens, John Kennedy from Radio X (including a recent Xposure live session), BBC6 Music’s Lauren Laverne & Chris Hawkins.

“This album has been a long time coming,” reflects Doug, “and it feels great to have it finally released. After three years of jamming, writing, debating, recording, gigging, multiple games of worms and copious caffeinated beverages we finally ended at this point. The album as whole has a broad twist of genres, vibes and sounds, I guess it shows the eclectic influences and the love we have for shovelling all sorts of music into are heads. “

In terms of musical influences, fans of The Flaming Lips, Arcade Fire, Sparklehorse and Tame Impala will all find something to love in Plastic Mermaids richly-textured sound. This is amplified by their ecstatic live show as you see band members regularly swap instruments on stage, take violin bows to guitars and use megaphones to twist their sound. Their sparkly-gold cape adorned choir and mascot in the form of a mannequin covered head to toe in mirror ball tiles also nod to a sense of fun and adventure found similarly at a Flaming Lips show.


Most bands wouldn’t go to those sort of lengths for their art, but Plastic Mermaids aren’t like most bands. More than just a record, they have created their own very idiosyncratic world. On ‘Suddenly Everyone Explodes’, you can explore it for yourself.


You can catch Plastic Mermaids live at the following dates:

“Plastic Mermaids win me over from the start…the tones are all just right – there’s something very classic about this.”– THE FADER


“Plastic Mermaids combine the sounds of alt-folk, space-rock and chamber pop in a piano-led fantasy that The Flaming Lips would be proud of “ – NME


“Some of the most creatively deployed panning heard all year. Cinematic and gorgeously textural, this cut sounds like Mercury Rev going on a road trip with The Flaming Lips.” – Q MAGAZINE

“Fantastic, ‘I’ve always thought of them as a bit of a British Mercury Rev... They’ve been away for a while. So good to have them back” JOHN KENNEDY/RADIO X

“This is new now by Plastic Mermaids … That reminds me of something, that chorus line. I can’t think what. A new favourite of mine this one. A gigantic tune. A brilliant brand spanking new one.” CHRIS HAWKINS/6MUSIC - 19/10

For further info on Plastic Mermaids please check out: