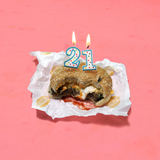 THE LOTTERY WINNERS REVEAL NEW SINGLE ‘21’ FROM SELF TITLED DEBUT ALBUM – DUE OUT 13th MARCH Lottery Winners are kickstarting their year with brand new single ‘21’, lifted from their self-titled debut album which is due for release on 13th March 2020 via Modern Sky UK . Full of tenacity, ‘21’ is emblazoned with anthemic guitar lines and the band’s trademark, indie sound. “How does it feel to be 21? Careless and free with no concept of ever growing up. Wouldn’t it be nice to freeze that moment in time?” ponders frontman Thom Rylance. ‘21’ follows on from last year’s superb releases ‘Hawaii’ & ‘Little Things’; indie pop at its catchiest, gathering early support from the likes of Clash, NME, Earmilk & BBC 6 Music’s Chris Hawkins. 2020 has already seen the band gain a video spot on Channel 4’s Sunday Brunch and feature on Amy Lamé’s new year/new sounds show on BBC 6 Music. Born and bred in Leigh, Lancashire, Lottery Winners are bringing back a sense of fun and a fiercely independent spirit to British music, with an eye on modelling it in their image, and proof that alternative, guitar-based tunes belong at the top of the charts and to the masses. They’re everything a good band should be; ambitious, bold and in touch with their growing legion of fans. After being discovered by music industry legend Seymour Stein (who famously signed Madonna, The Ramones, Talking Heads and many more) Lottery Winners have spent the last two years recording tracks for their debut album…. a complete labour of love, with a longer than planned delay due to the well-trodden path of record label disputes and the lengthy process of taking back control. The album was produced by award winning producer Tristan Ivemy (Frank Turner) and mastered by Frank Arkwright (The Smiths) at Abbey Road This foursome are bringing back a sense of fun and a fiercely independent spirit, having truly grafted to reap the rewards. Now signed to Modern Sky UK, Thorn, Kate, Rob and Joe are winning over a slew of new fans, stealing the hearts of audiences across the UK and Europe, with support slots for the likes of Catfish and the Bottlemen, Tom Jones, Madness, The Libertines, and a storming Glastonbury debut in June. In support of their debut album, the band recently announced details for their extensive headline tour throughout March and April 2020. The 13 date tour kicks off in Nottingham on the 26th March, ending with their biggest ever show to date at Manchester Ritz on 11th April. All dates and details are below. Lottery Winners is made of real flesh and bones. It’s made of working-class Britain. It’s made of self-deprecation, dire deprivation and true dedication. Their live shows explode from the stage and stay in the minds of the audience, buried in there forever. They always come back. This is your new favourite band, whether you know it yet or not. TOUR DATES MARCH 26 Nottingham Bodega 27 Leeds The Key Club 28 Southampton The Joiners 30 Brighton The Prince Albert 31 London Lexington APRIL 01 Milton Keynes Craufurd Arms 02 Cardiff Club Ifor Bach 03 Birmingham The Castle & Falcon 04 Hull Polar Bear 07 Newcastle Think Tank 08 Edinburgh Sneaky Pete’s 09 Sheffield The Leadmill 11 Manchester The Ritz Watch The Videos For Little Things | Hawaii Self Titled Debut Album Coming March 13th 2020 Via Modern Sky Uk Lotterywinners.Co.Uk