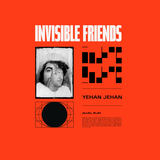 ‘Invisible Friends’ features vocals from Yehan’s sister Zadi, who also stars with him in the brilliantly bizarre and stylish video. Channelling the suburban weirdness of films like Donnie Darko and Napoleon Dynamite, the video was produced and directed by Yehan himself.

The track flies on a classic guitar-funk groove, while the lyrics pass on words of reassurance and hope to the younger Yehan. “Invisible Friends is a time capsule of a period when I was at school, growing up in North London,” he says. “It's a memory trip of the good and bad times, mostly bad actually as I never really liked the school I was at. This song is pure escapism for that younger me for the bus ride home.”

Yehan Jehan’s elegant, gliding songs can trace a lineage back to Steely Dan and Hall & Oates, as well as easing next to contemporaries like Jungle and Kindness. Currently residing in Paris, Yehan was born in North London after his parents moved from Bosnia in the early 90s. His father is a composer, his mother a piano teacher, so messing around with music came naturally. He was composing music by the age of 12, while at the same time writing scripts, making films and animations. These interests have continued into adulthood, Yehan designs his own artwork and directs his videos, as well as producing and playing everything himself. That his music is all the work of one man is impressive. That it’s all been done, videos and ‘80s-inspired artwork and all, from his compact Paris apartment is pretty damn remarkable.

Yehan Jehan will headline London’s The Waiting Room on March 17.