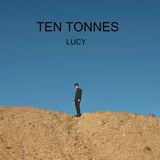 “Captures that magical moment when a tyro musician is poised to go off like a rocket.” – Sunday Times Culture

“Right now I’m going to play you some Ten Tonnes, this is a bop, he knows how to write a tune, he’s George Ezra’s little brother, it’s probably in the blood.” – Annie Mac

“This is my favourite new song of the moment… I think it’s amazing, I love it.” – Chris Evans

“Really excellent… very much one to listen out for and watch in 2019.” – Lauren Laverne

“That’s so good! It’s Ten Tonnes, he played in session for me on the previous incarnation of this show - and was really impressive.” – Jo Whiley

“You can’t listen to his music without having a big grin on your face.” – Vogue

“Destined to become a pop heavyweight in 2019.” – Daily Star

TEN TONNES has hit a killer run of form in recent months as the May 3rd release of his self-titled debut album approaches. Tipped in YouTube’s Ones To Watch 2019 playlist as well as Radio X’s Great X-Pectations list of the best new music for 2019, he started the year by completing a headline tour that sold-out in advance.

Now TEN TONNES, aka the 22-year-old Ethan Barnett, has added to that momentum by sharing his new single ‘Lucy’, which Annie Mac played as her Hottest Record in the World. Firmly established as a fan favourite as a regular closer to his live show, it’s a track which distils all of the musician’s finest traits into one song: immediately captivating melodies, an anthemic holler-along hook and his characteristic lovelorn lyrics.

"I’m so excited to finally properly release this tune,” says TEN TONNES. “It’s the song that started everything off for me so I’ve always had a special place for it, and it's become a fan favourite on tour too.”

TEN TONNES’ debut album was produced by Hugo White (The Maccabees) and Dan Grech (Wolf Alice, The Killers, Liam Gallagher). They maximised his potential with two different approaches which yielded a free-flowing set of songs with the driving energy of his live shows. White encouraged him to capture one-take live performances with backing from Maccabees’ duo Rupert Shepherd (bass) and Sam Doyle (drums). Meanwhile, Grech focused on making each part TEN TONNES recorded (vocals, guitar, bass, keys) as tight as he possibly could.

The album is available to pre-order from http://tentonnes.com/, and will be released on digital, streaming, CD and vinyl formats. A variety of signed copies and special album bundles are also available from specific retailers. The singles ‘Lucy’, ‘Better Than Me’, ‘Lay It On Me’, ‘Cracks Between’, ‘G.I.V.E.’ and ‘Silver Heat’ are all provided as instant downloads for fans who pre-order the album.

TEN TONNES will celebrate the album’s release by playing the following headline tour in May. His hectic summer festival schedule so far includes UK shows at Reading, Leeds, Glasgow Summer Sessions, Truck, Y Not, Hit The North and Kendal Calling, as well as Southside and Hurricane in Germany.