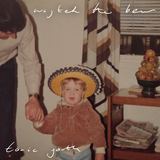 Scottish Fiction are proud to present tonic youth, the brand new single from Glasgow four-piece wojtek the bear. tonic youth is the first of four singles being released by wojtek the bear during 2019, which will be collected on a limited edition 10” vinyl in the autumn.
Coming straight off the back of their well received debut album, a talent for being unreasonable, Glasgow's wojtek the bear have wasted no time in getting back into the studio to furnish us with fresh music for 2019. Recording in the legendary Chem 19 with producer Jamie Savage [The Twilight Sad, Miaoux Miaoux, The Phantom Band, RM Hubbert], the band, with chiming melodies, pulsing bassline and swirling guitars, aim for that musical sweet spot between Camera Obscura's Lloyd I'm Ready To Be Heartbroken and Real Estate's It's Real.
Of the track, lead singer Tam Killean reveals; “When I first moved into Glasgow in my early 20's I quickly encountered people at parties I'd never been exposed to before; kids who'd never worked a day in their life, spent their summers in Val-d'Isére or Biarritz and all seemed to have fucking ponies. This song is about how initially on coming into contact with them I had a bit of a crisis of confidence, thinking that I'd wasted my life by just getting absolutely smashed from the age of 15 onwards.”
tonic youth will be released digitally on all platforms on 3rd May 2019 via Scottish Fiction. Pre-save the single via Spotify here. The video for tonic youth can be viewed here. Pre-orders of the 10” vinyl are available here with an immediate download of tonic youth. For enquiries please contact: Neil Wilson, scottishfiction@mail.com, 07584220918
PRESS QUOTES As featured by Lauren Laverne, Tom Robinson (BBC 6Music), Huw Stephens (BBC Radio 1), Vic Galloway, Roddy Hart, The Afternoon Show (BBC Radio Scotland), John Kennedy (Radio X), KEXP, STV's Live at Five show... “...both delicately pretty and staggeringly imposing” – Louder Than War “This is delightful pop music to bring you out in general physical happiness” – Fresh on the Net “A wonderful record that soars through emotions” – Scottish Sun